2D and 3D street art has been around for a long time and one of the most popular forms is creatively designed or modified zebra and pedestrian crossings. Today, there is a trend that is taking zebra crossings beyond the purely artistic and actively promoting pedestrian and traffic safety.

The reason for this is that many drivers around the world don’t seem to pay much heed to pedestrian crossings that aren’t controlled by lights. A 1998 study by the Department of Traffic Planning and Engineering at Sweden’s Lund University found that three out of four drivers maintained the same speed or even accelerated as they were approaching a crossing. Even worse, only 5% stopped even when they saw someone about to cross.

Recently, a 3D painted zebra crossing which gives the optical illusion of white blocks floating in the road has been trialled in Ísafjörður, Iceland. The work was carried out by road painting company Vegamálun Gíh, who were tasked by the town’s environmental administrator after they had been looking into ways of reducing traffic speed. The firm only came up with the idea in August 2017, taking just a few weeks to get the green light from local authorities. Vegamálun CEO Gauti Ívar Halldórsson told Icelandic website Visir: “A pedestrian crossing like this makes it look like there’s something blocking the road.”

A growing number of cities in India are already adopting the use of 3D zebra crossings after successful trials in Ahmedabad, western India during 2015. Mother and daughter artists Saumya Pandya Thakkar and Shakuntala Pandya were commissioned by IL&FS, the company that manages the local road network, to paint the pedestrian crossings in an innovative way to help the city’s residents safely cross the busy, accident-prone roads.

Shakuntala Pandya recalls, “We had previously seen images of 3-dimensional zebra crossings in China that gave drivers the illusion of wooden logs on the streets. We decided to see if a similar tactic would work in India.” In the six months after the 3D crossings were painted across four of the city’s most dangerous highways, there were no pedestrian accidents reported.

Could these 3D crossings cause drivers to brake suddenly and endanger the vehicles behind? Saumya Pandya Thakkar believes not, “Because of the way the human eye works, the illusion is only visible from a distance. As a driver gets closer, the painting looks just like any other conventional zebra crossing which prevents panic breaking. But since the driver is travelling slower, they are more likely to stop for someone wanting to cross the road.” Which sounds great, and all without the aid and cost of traffic lights. 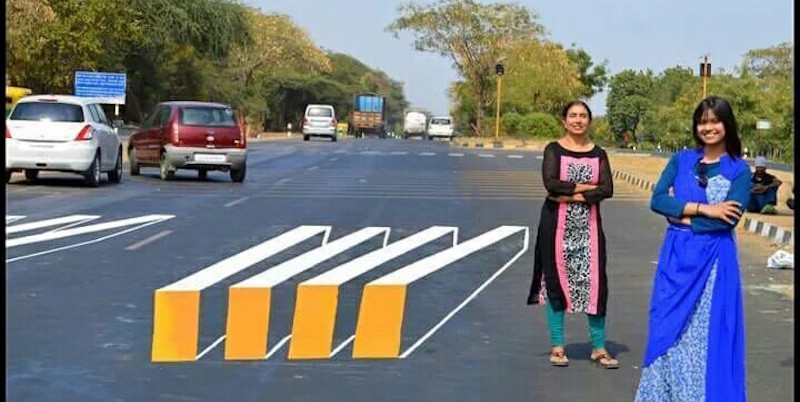 The first proponents of 3D zebra crossings, as Shakuntala Pandya found, were replacing traditional zebra crossings with colourful, psychedelic images on the roads in Taizhou, eastern China, back in 2008. The authorities there commissioned artists who in turn designed ‘floating’ 3D crossings, which appear to be levitating above the street when seen from a distance. “We wanted the new crossings to become a real safety belt for pedestrians and vehicles,” a traffic police spokesman from Taizhou said.

The safety of cyclists was also considered. From their perspective the illusions are be easy to spot when riding along the side of the road. “Pedestrians can now feel safer when crossing the street. It’s a great idea,” said Taizhou cyclist Lee Wu.

Design choice is an important part of the safety equation. In 2015 Suqian, China made national headlines when it launched a painted crossings project. Many of the designs featured paintings of popular cartoon characters but drivers complained that they were often distracted while driving over them, a Shanghai-based news portal, Thepaper.cn, reported. The crossings had to be repainted a few days later after some sections became slippery. Some local residents said they often felt dazzled when crossing the roads and the designs could encourage children to loiter there. At least children would be crossing the road where they’re supposed to. 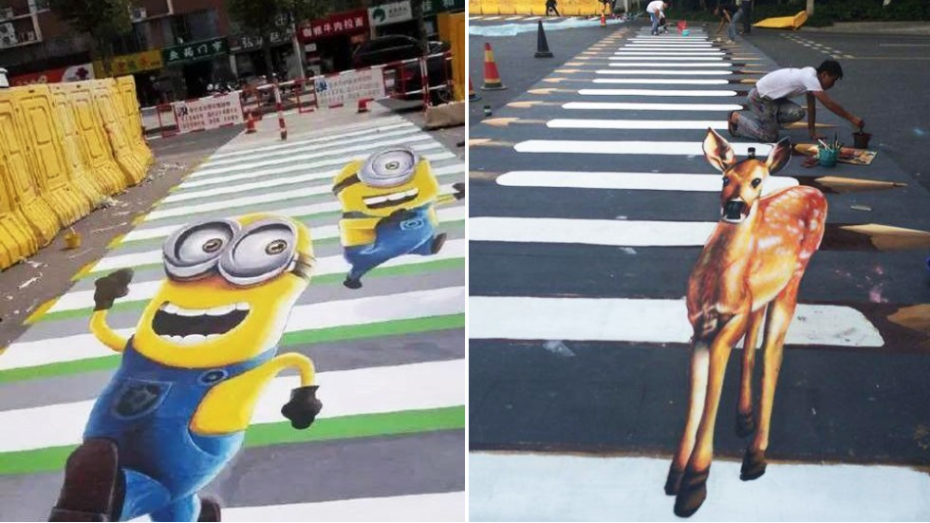 This is where the simpler, geometric designs work better. And they don’t even have to be painted. A Chinese firm is selling extra durable, adhesive vinyl strips which are grippy in wet weather, reflective at night and last for 2 years. They can be installed with the minimum disruption to traffic.

Of course, while drivers could quickly get used to 3D crossings and remember their locations, the eye can still be fooled rather easily with the help of these designs. It’s likely that drivers would still slow down to avoid a 3D object before the brain fully processes what is being seen. Hopefully these same drivers just need to be ‘reminded’ that a crossing exists in that location and they will continue to act accordingly in the future.

It’s not exactly clear how successful these crossing designs are at preventing injuries, but authorities in India and China are apparently satisfied with the results and we await to hear about the trials in Iceland.

We’re all for anything that helps to improve road and pedestrian safety and it’s pleasing to see when a low tech, graphic approach leads the way. And there are huge cost savings when compared to most other traffic calming measures. Let’s hope we see design implemented in the same way in the UK very soon.