Nottingham has a great relationship with beer and ales: as well as being home to Castle Rock Brewery and supposedly the oldest pub in England (Ye Olde Trip to Jerusalem, est.1189), it also hosts the annual Robin Hood Beer & Cider Festival. Taking place in the second week of October, the event has grown year-on-year as more independent brewers introduce themselves onto the market and onto the palettes of thousands of beer drinkers. To celebrate the beer festival, I came up with Michon’s very own fictitious craft ale.

With any project, research is essential in understanding the marketplace and competitor landscape. From a creative perspective it affects everything from look and feel, and tone of voice to subsequent messaging.

During this research we found the craft ales market endlessly fascinating – full of punk motifs and beer puns. It’s a market that has grown exponentially and is seemingly open to anyone with the initiative and resourcefulness to set up their own microbrewery. It’s a market undoubtedly creative but also controversial and a little bit lawless…

The history of craft ales

Almost 50 years ago a group of beer enthusiasts came together to form CAMRA – The Campaign for Real Ale. It was a reaction to the alarming rise in imported continental lagers that were fizzier and lighter than the traditional British beers.

This group of devotees argued that beer should be about quality, heritage, flavour and brewing technique. And in response, these enthusiasts started to brew their own beers in garages and kitchens, experimenting with hops and flavours.

From these humble beginnings began the UK craft ale revolution, that has helped boost the overall beer market which saw growth of 2.6% in 2018, the biggest increase for 45 years (SIBA). And today CAMRA represents 190,000 members, a number that keeps on growing year-on-year.

According to The Drinks Business, in 2018 Waitrose announced it was increasing its range of specialty, craft and international beer by 27% in response to similar moves by Tesco (boosted range by a third), Co-op, Asda (added 100 new craft beers) and Aldi (added 16 new craft beers).

In a surprise move, even the big beer brands that were initially bemused by the craft ale craze are now jumping onto the beery bandwagon.

So, what is our obsession with craft ales?

It could be down to the sea change in consumer habits where mass-produced products are now frowned upon as being wasteful with dubious origins. While there are clear trends in the rise of so-called ‘artisan’ products with the return of traditional techniques using locally sourced ingredients.

It could also be that craft breweries tapped (pardon the pun) into flavours underrepresented by the wider beer styles like India Pale Ale (IPA).

Regardless of the reasons, over the past five years the number of small UK breweries has risen by 64% and has created an overcrowded marketplace. This has led to a 20% surge in people registering trademarks for beers in the UK, according to new research, which warns of a rise in legal disputes ahead as brands are likely to overlap.

As far back as 2015, The Salt highlighted that craft brewers were ‘running out of names, and into legal spats’. Candace Moon, a lawyer specialising in helping brewers trademark their ideas, says ‘it’s becoming a frequently recurring issue…different breweries thinking they’ve coined the same puns and catchphrases for their beers. A quick Google search reveals multiple beers named “Hopscotch”, and at least three India Pale Ales with the name “Bitter End”.’

Our fictitious craft ale, Huffy Bear actually started out being named Angry Bear – mainly because I like drawing angry bears. But I soon discovered that I’m not the only one who likes a bear with an ill temper.

A quick Google search reveals there are several Angry Bear beers and craft ales already on the market, there’s even an Angry Bear beer festival – all coexisting happily or blissfully unaware of each other – I can’t think of a single other consumer product where this would be tolerated. 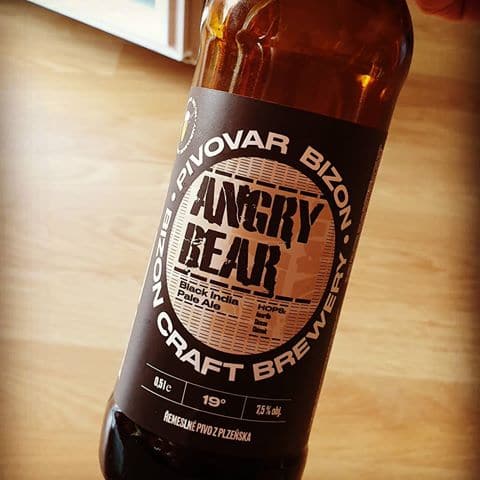 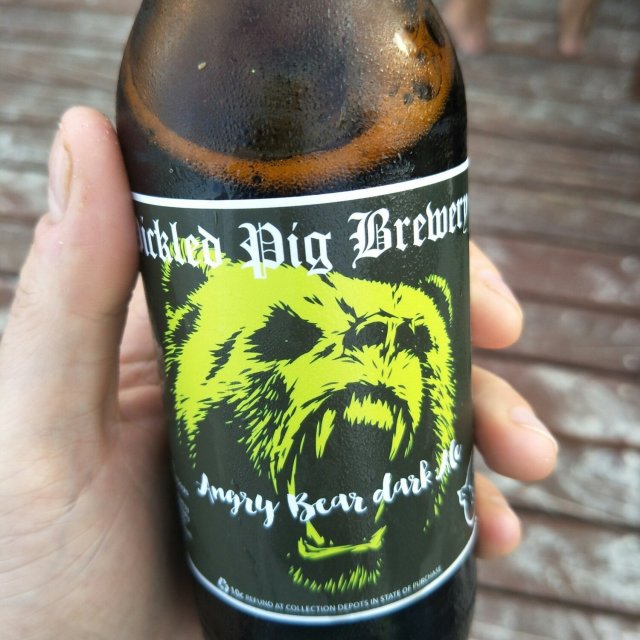 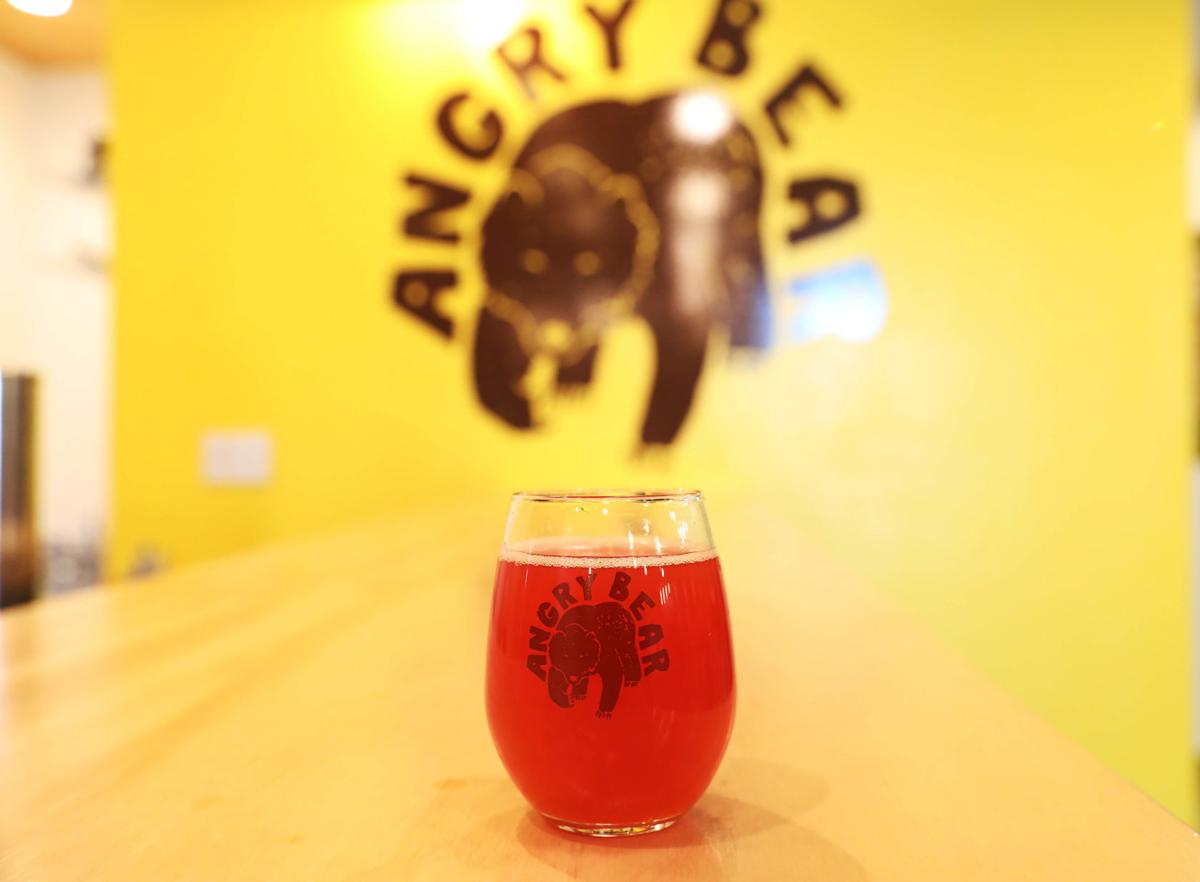 Could it be that craft breweries and microbreweries have misconceptions about their trademark rights? Many incorrectly believe they’re entitled because they have a domain name, are registered and have the rights to their brewery and beer names.

There is also a legal grey area where a similar name may not matter, if the beer is sold in different regions and there are enough dissimilarities in the label design. Some beers are sold as limited editions to navigate these particular copyright issues.

And if legal wrangles over labels wasn’t controversial enough, big established craft ale brands have had their fair share of unwanted PR.

Only this year BrewDog released an alcohol-free beer with a cross platform campaign to much fanfare and a knowing nod to Public Image Ltd. But the release was slightly muddied when their previous agency Manifest tweeted that the idea BrewDog used was created originally by them and rejected (and had not been credited nor paid for it). BrewDog could have done without the twitter spat, but it ultimately made them look even more punk.

As I said… fascinating stuff.

As a creative, it’s challenging but also immensely fascinating to tackle such a market. I know historically the beer market has always conveyed an impression of brave marketeers who are enthusiastically encouraging their agencies to do things differently.

Whether it’s Carlsberg tapping into lad culture with their endlessly adaptable ‘Probably’ strapline, Hofmeister’s Follow the Bear or Guinness turning their adverts into high art.

Craft ale brands, on the other hand, focus their own advertising less on lifestyle and more on product. Brewdog successfully took a pop at the big four (Stella, Fosters, Budweiser and Carling) and not so successfully took on Scotland’s largest brewery Tennent’s.

What is clear is that there is substantial change in modern beer drinkers’ tastes which is forcing the larger beer brands to finally embrace honesty in their advertising.

Just recently, CAMRA have been telling brands to stop being sexist or they will be banned from their influential flagship festival, The Great British Beer Festival at London’s Olympia. So, we can expect continuing shifts in this dynamic but maturing market.

All of these factors were considered when developing this imaginary craft ale brand with a cranky bear. And what started as packaging, quickly turned into a branding project. Defining the brewery’s brand personality, creating the core identity and messaging, as well as label design, bottle caps, six-pack carriers, merchandise and campaign material. We think it ticks all of the boxes, we are even thinking about registering the name and starting our own little sideline.

Now where can you order a bag of hops? 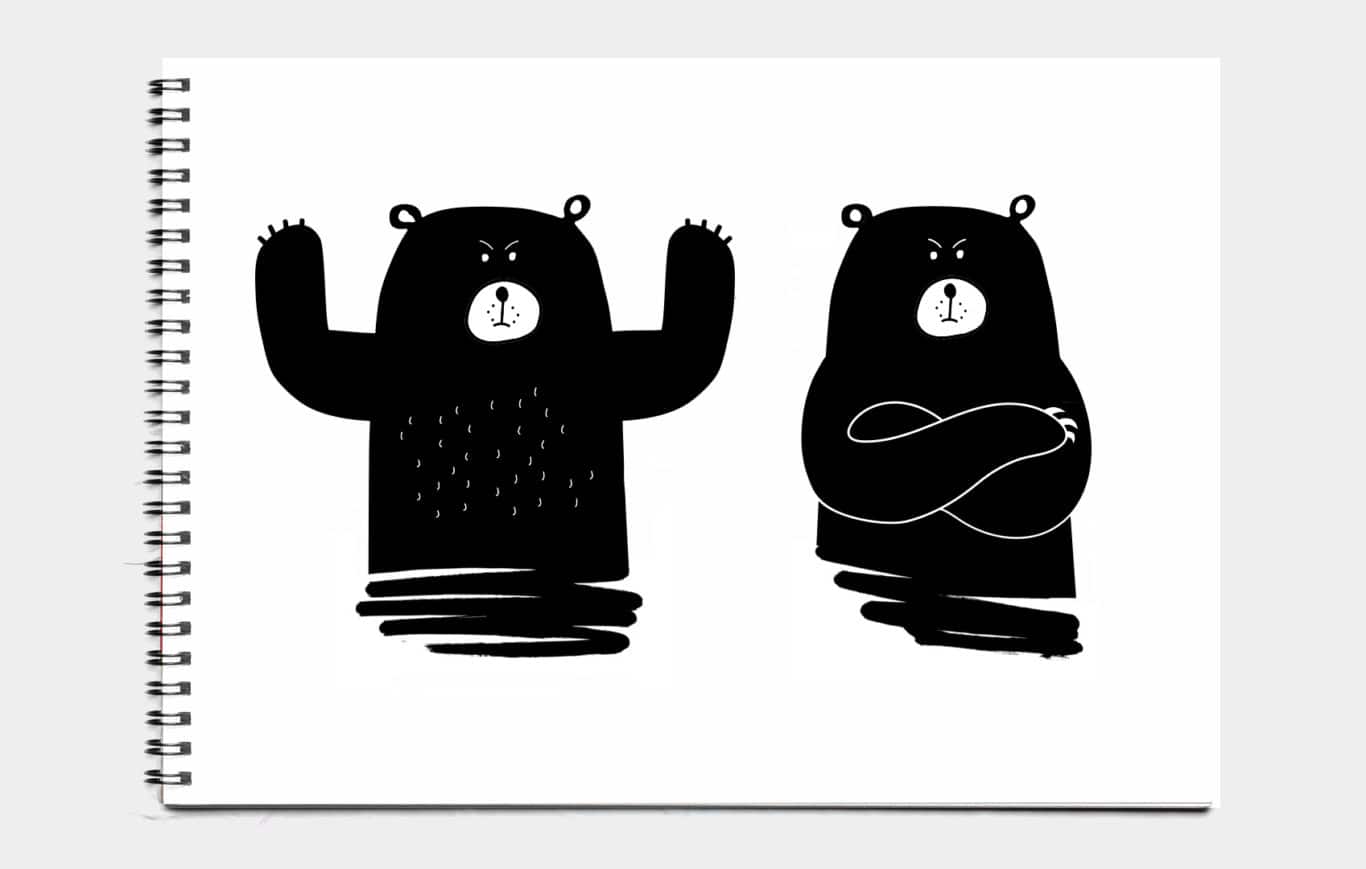 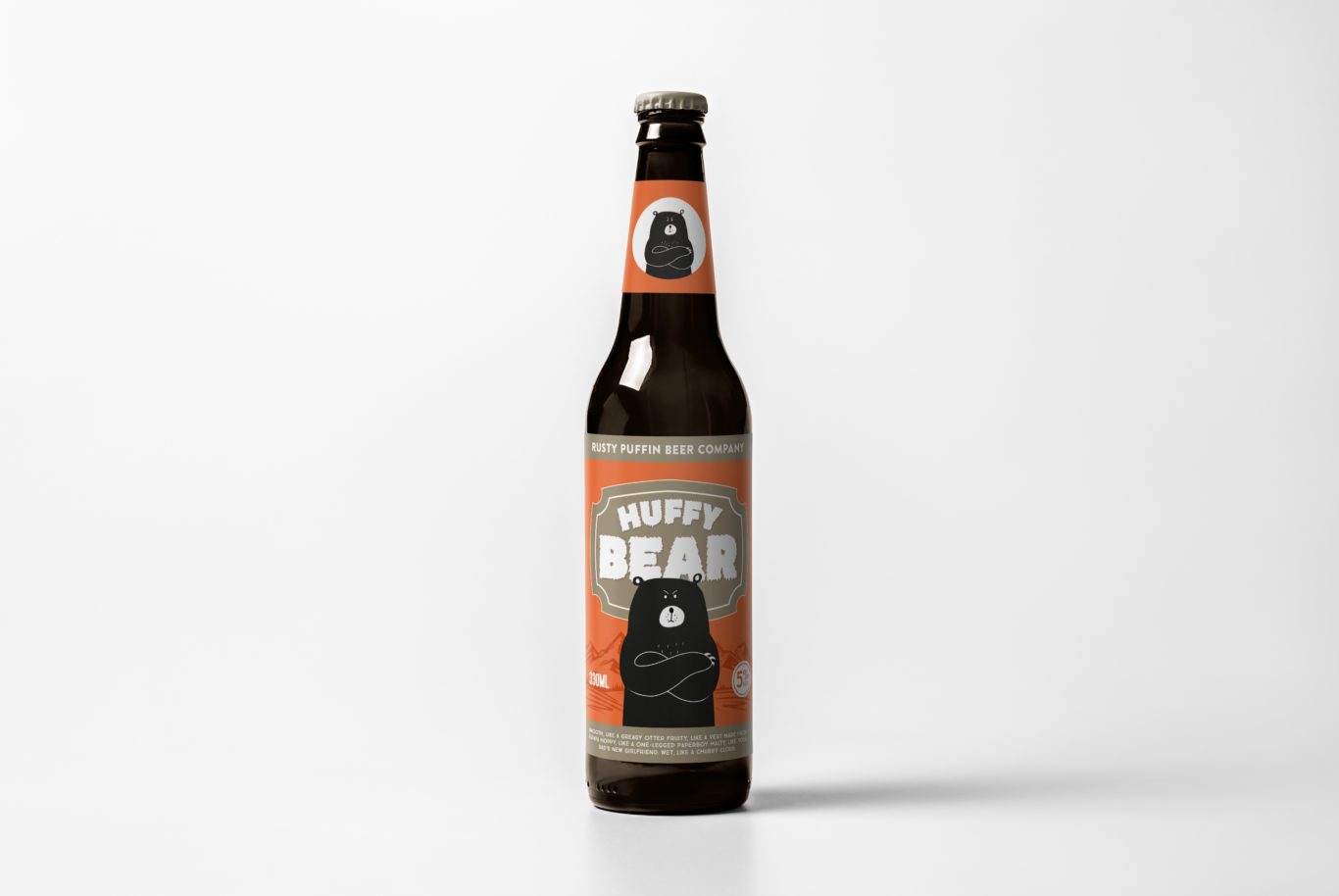 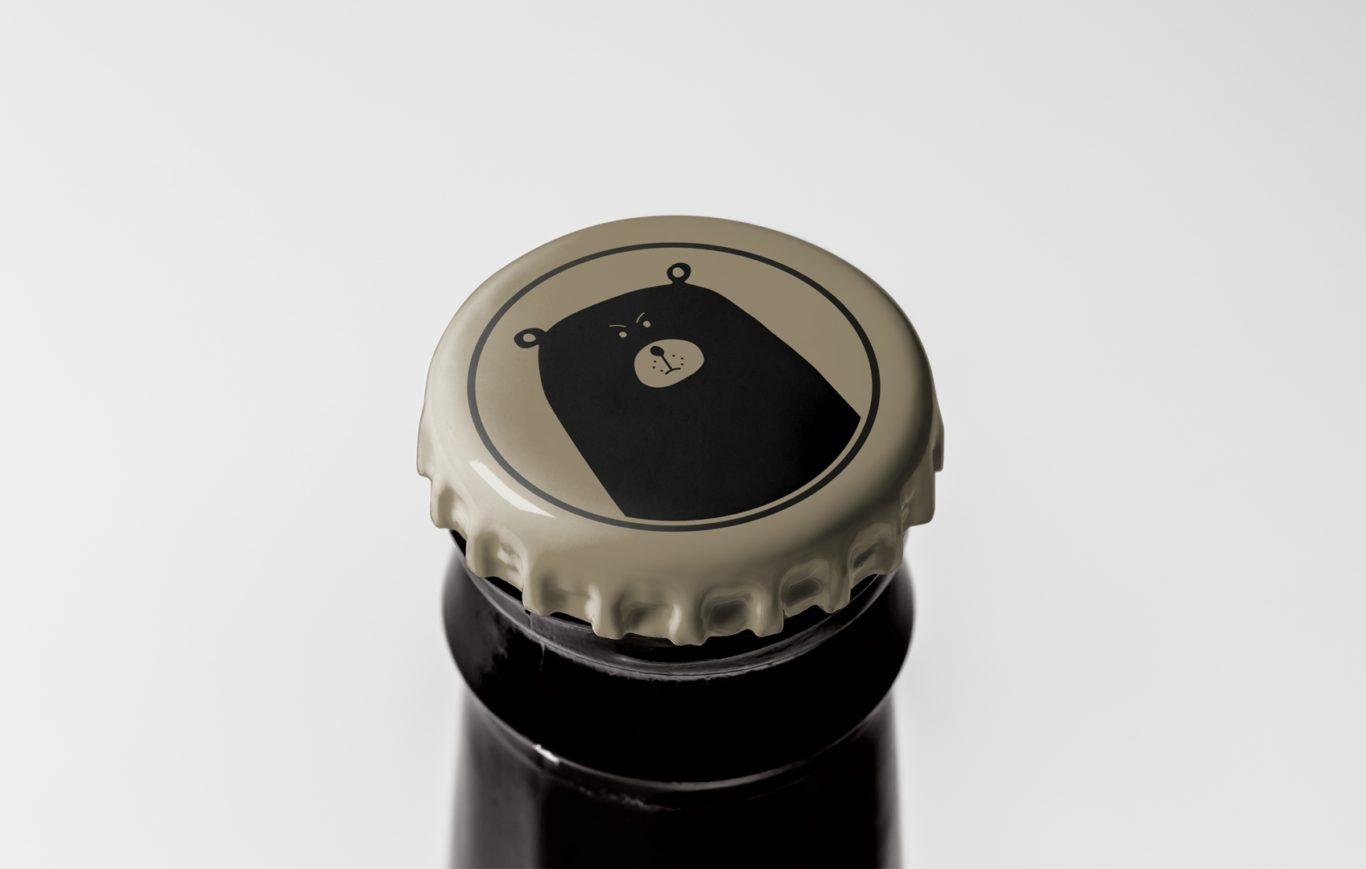 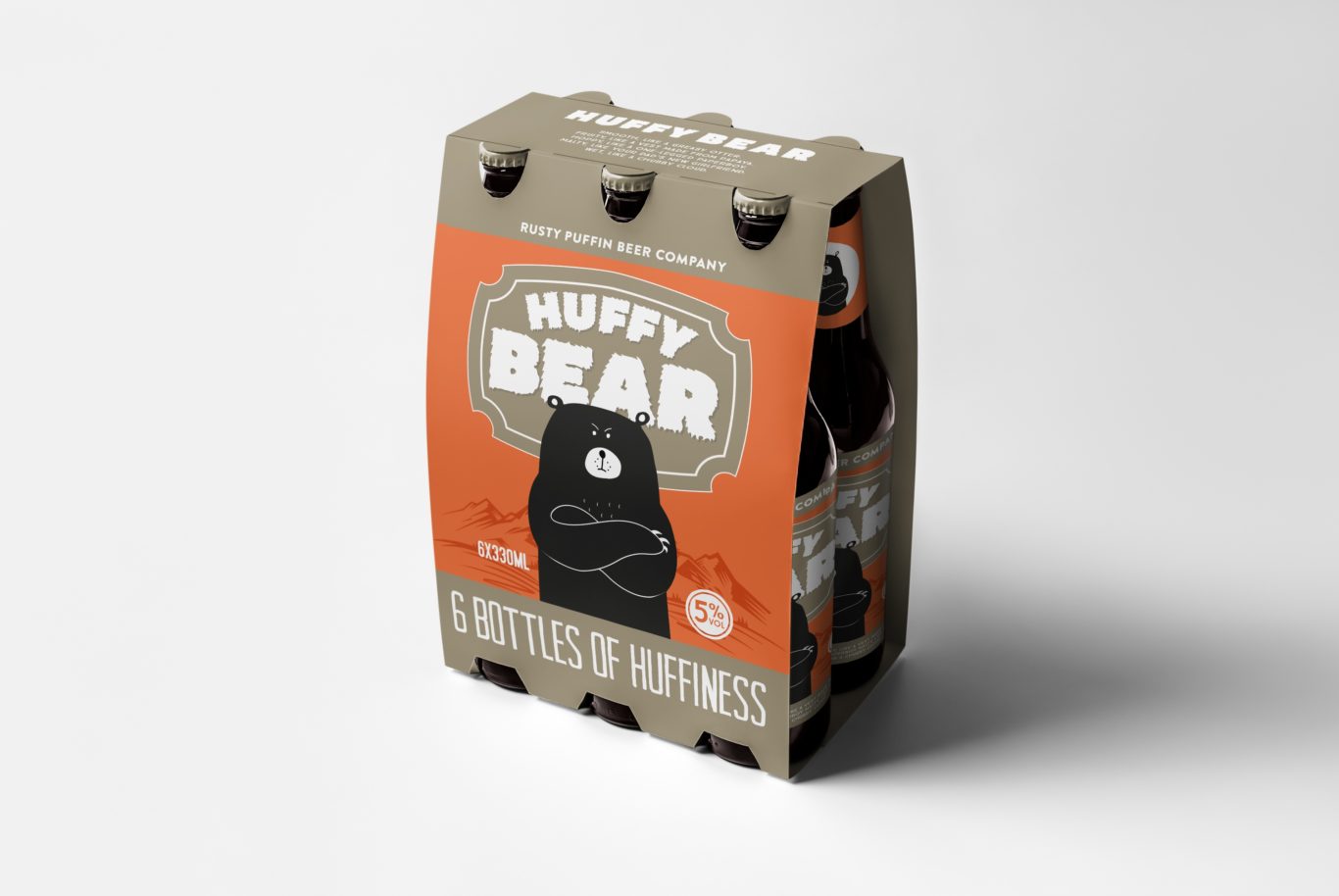 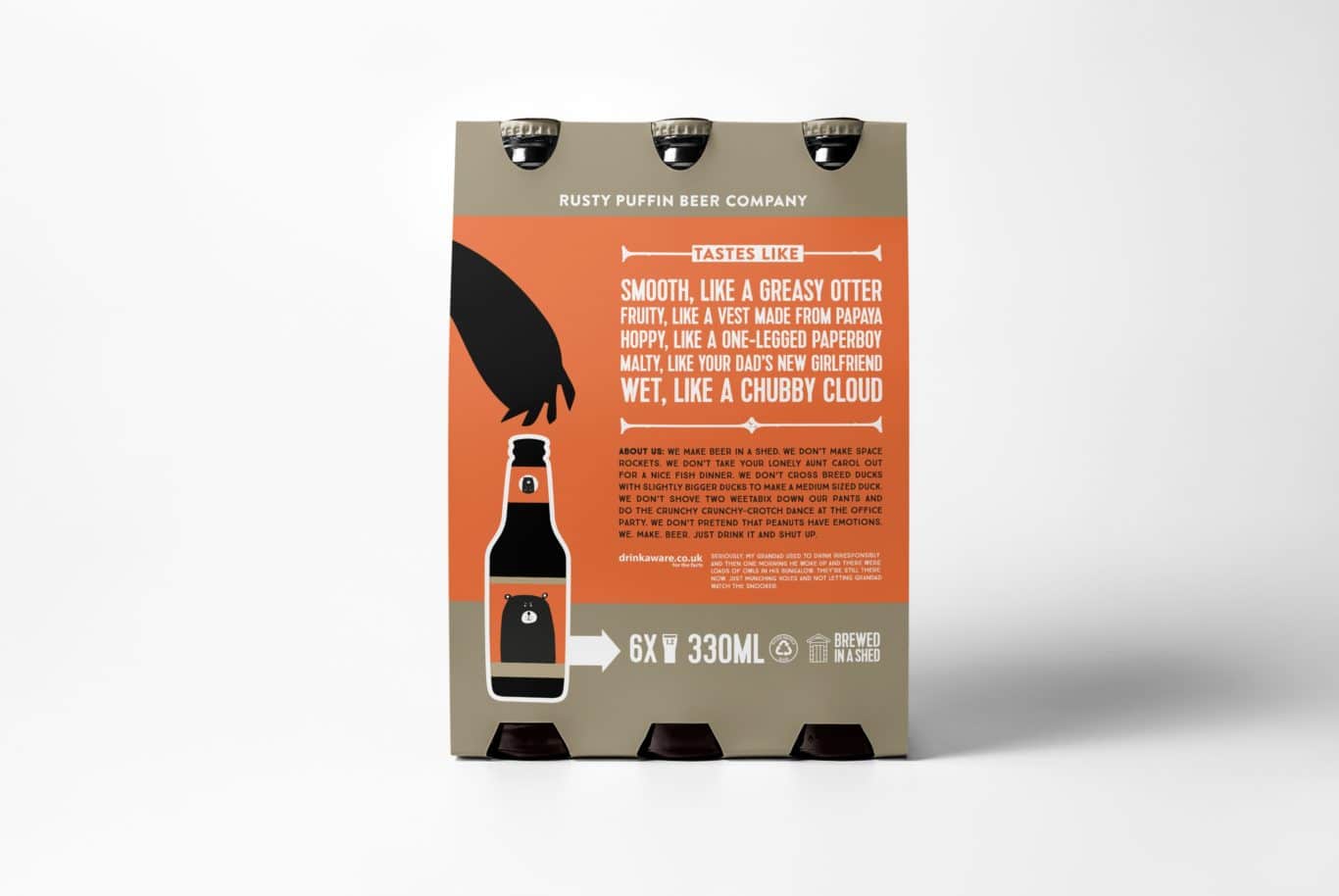 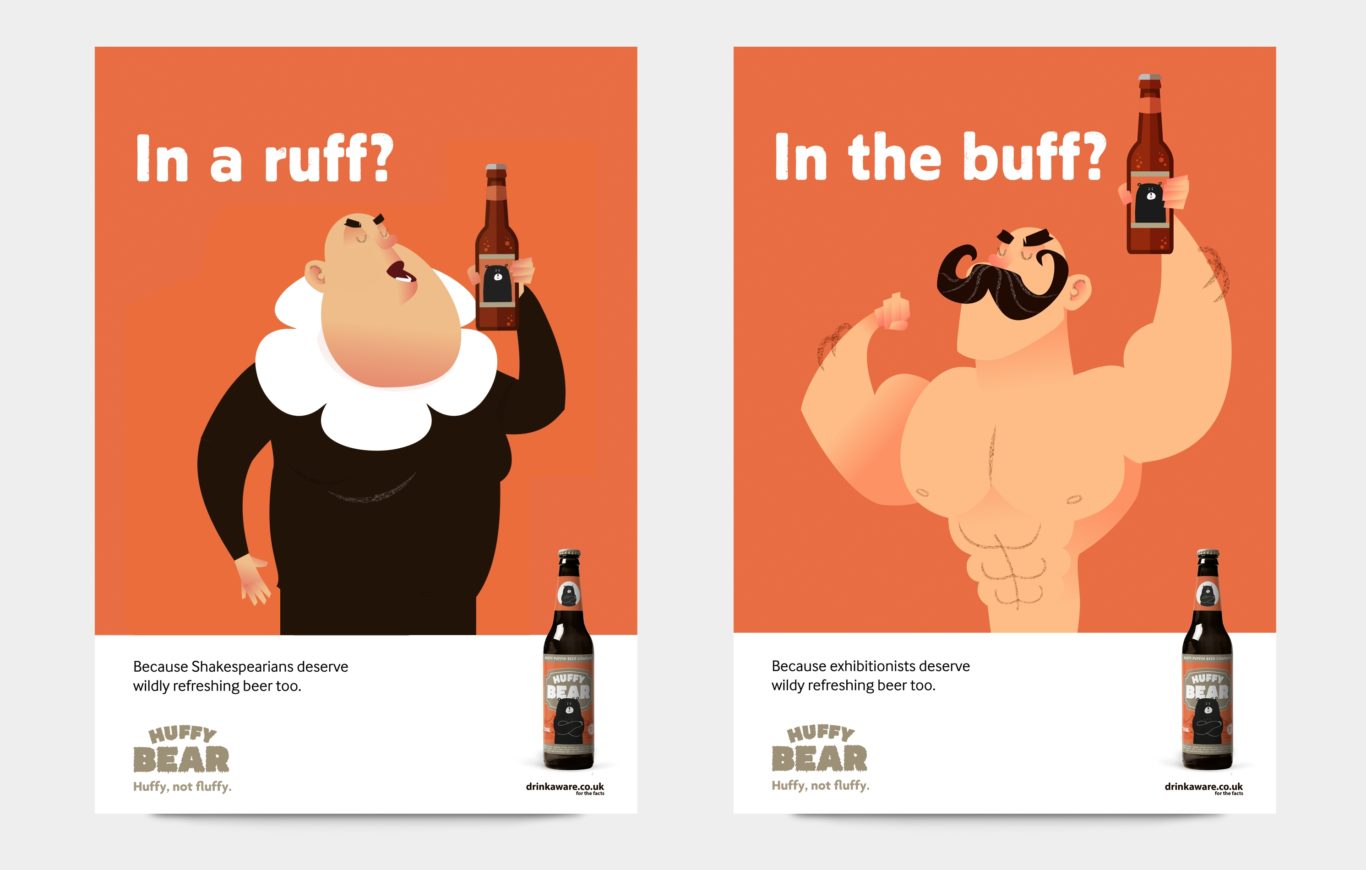 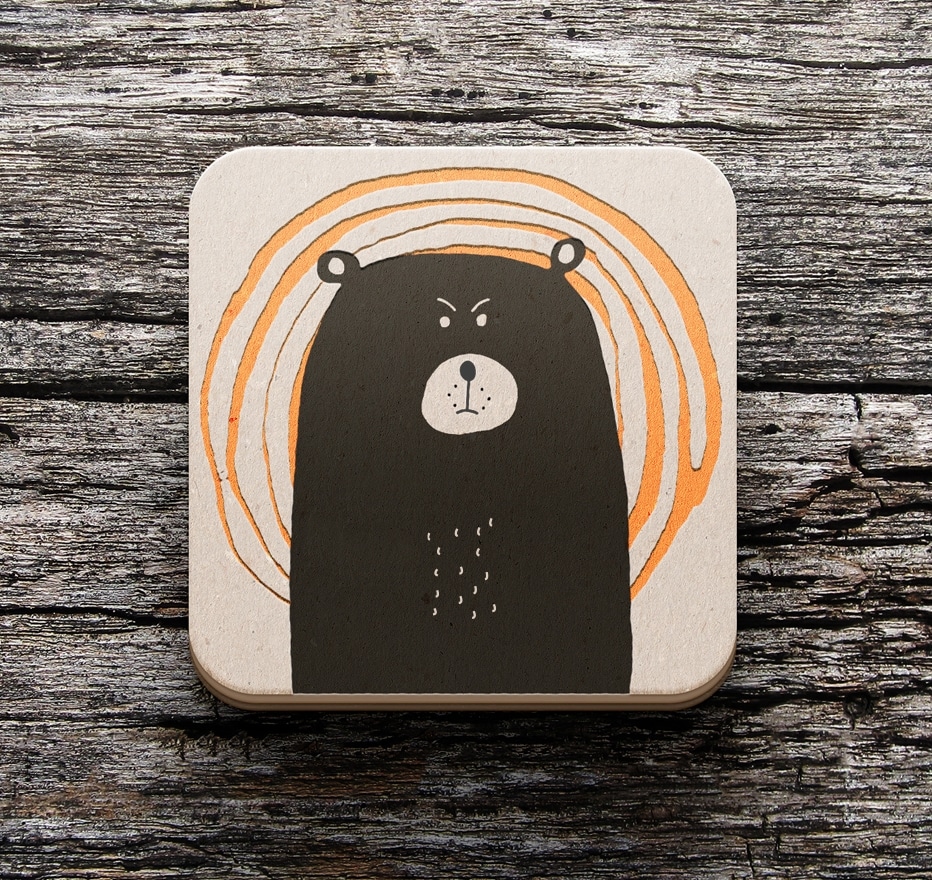 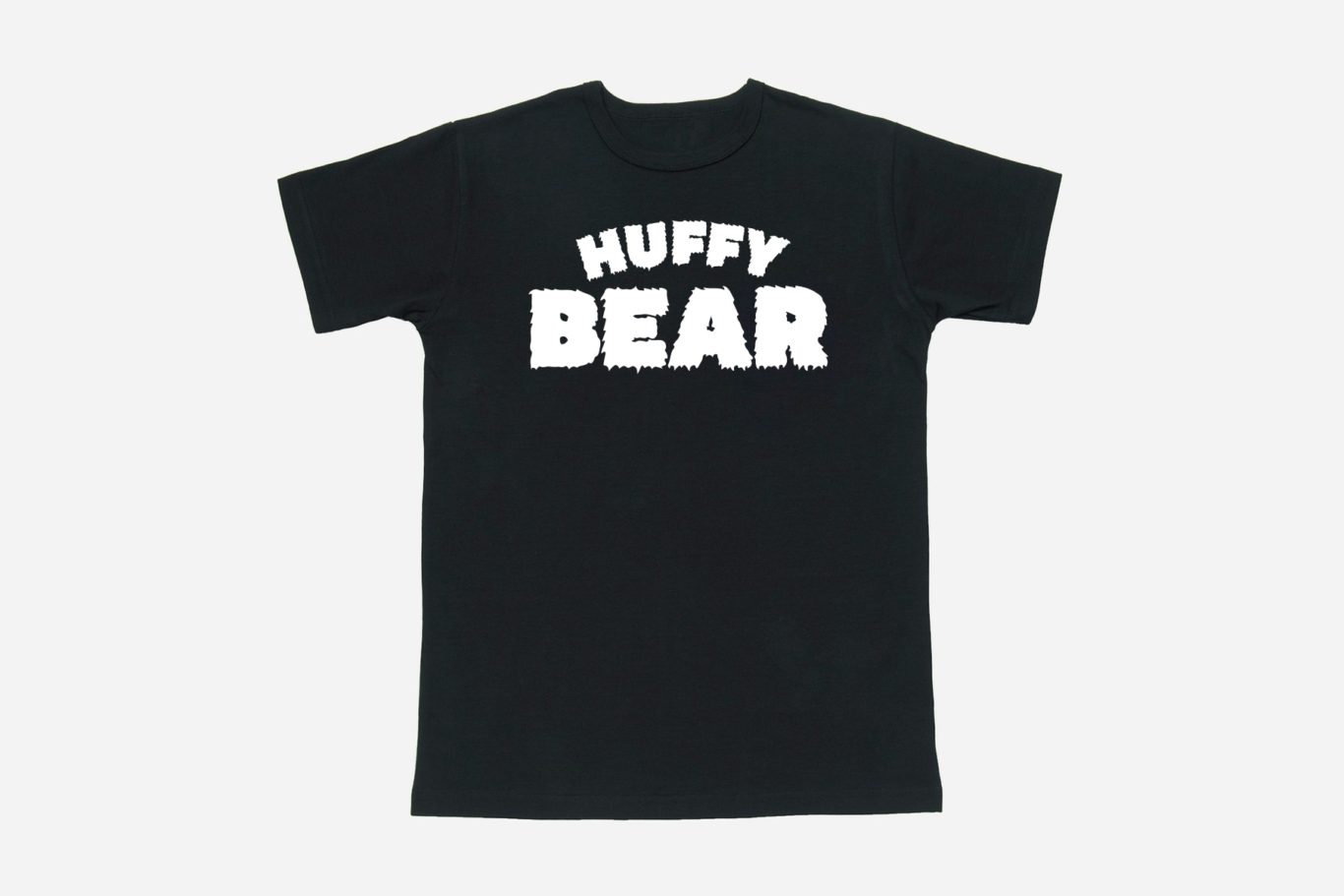